How can we explore a humanities topic, idea or question in a new way? This intriguing question is the basis for Humanities Guåhan’s program, Art+Ideas.

Art+Ideas explores the intersection of the creative arts - filmmaking, the visual and performance arts, traditional art making, culinary arts, poetry and creative nonfiction - and the humanities.

Through a series of immersive and experiential workshops, Humanities Guåhan engages our community around timely topics and ideas relevant to Guam and the Asia-Pacific region. The workshops include creative and artistic forms of expression and interpretation through readings, conversations and presentations with students, teachers, scholars, writers, artists, chefs and the larger public. In 2020, these workshops were conducted via Zoom as a result of the ongoing COVID-19 pandemic. 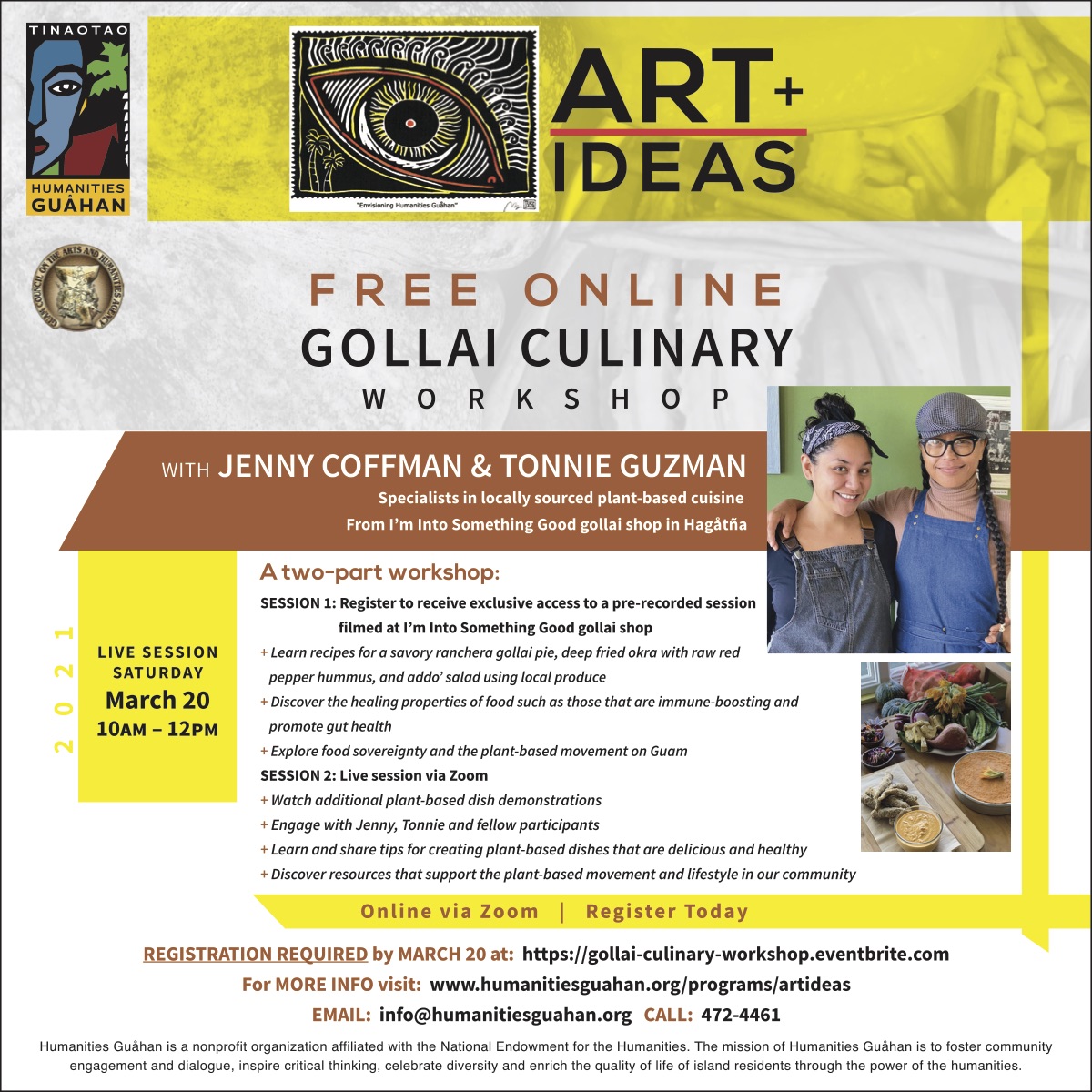 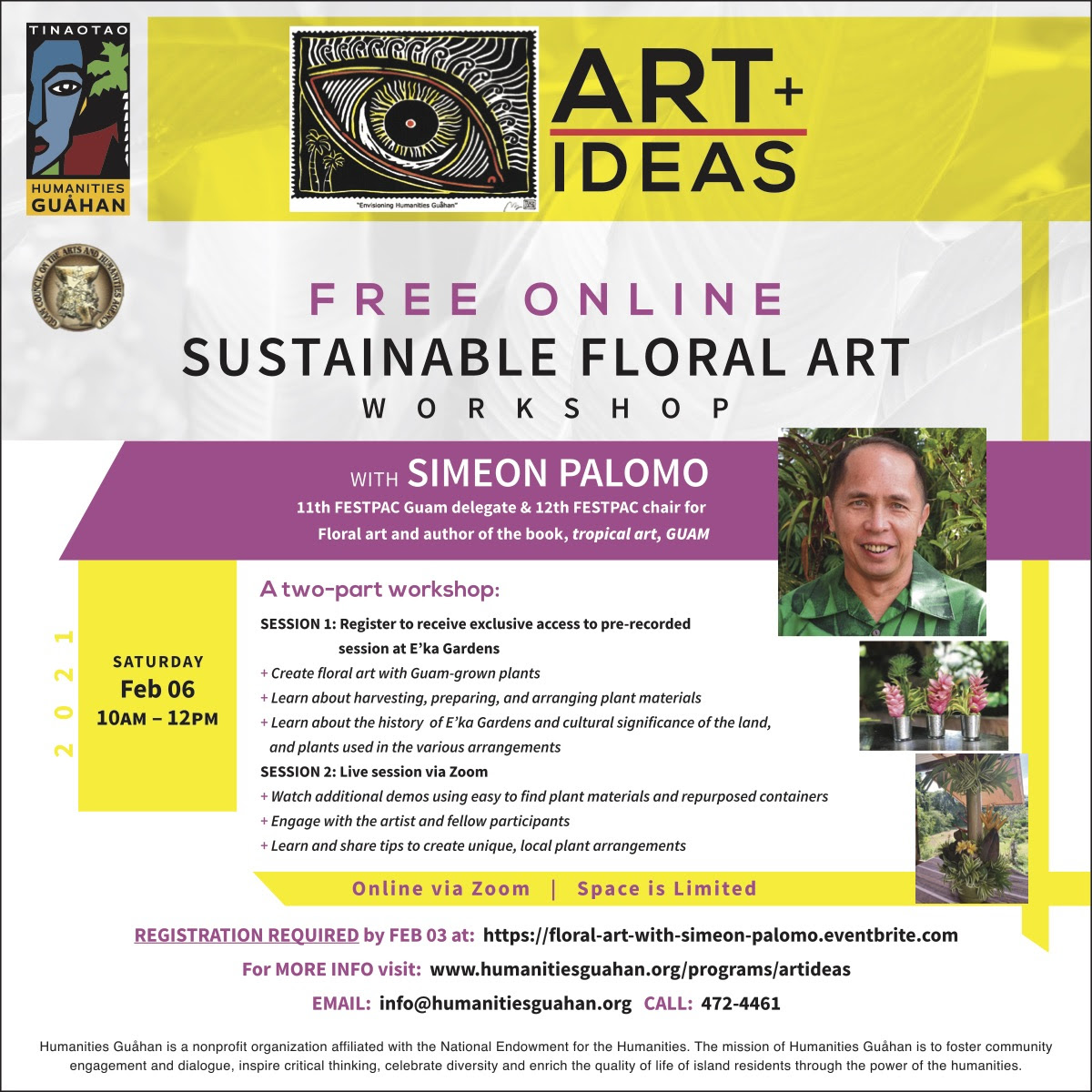 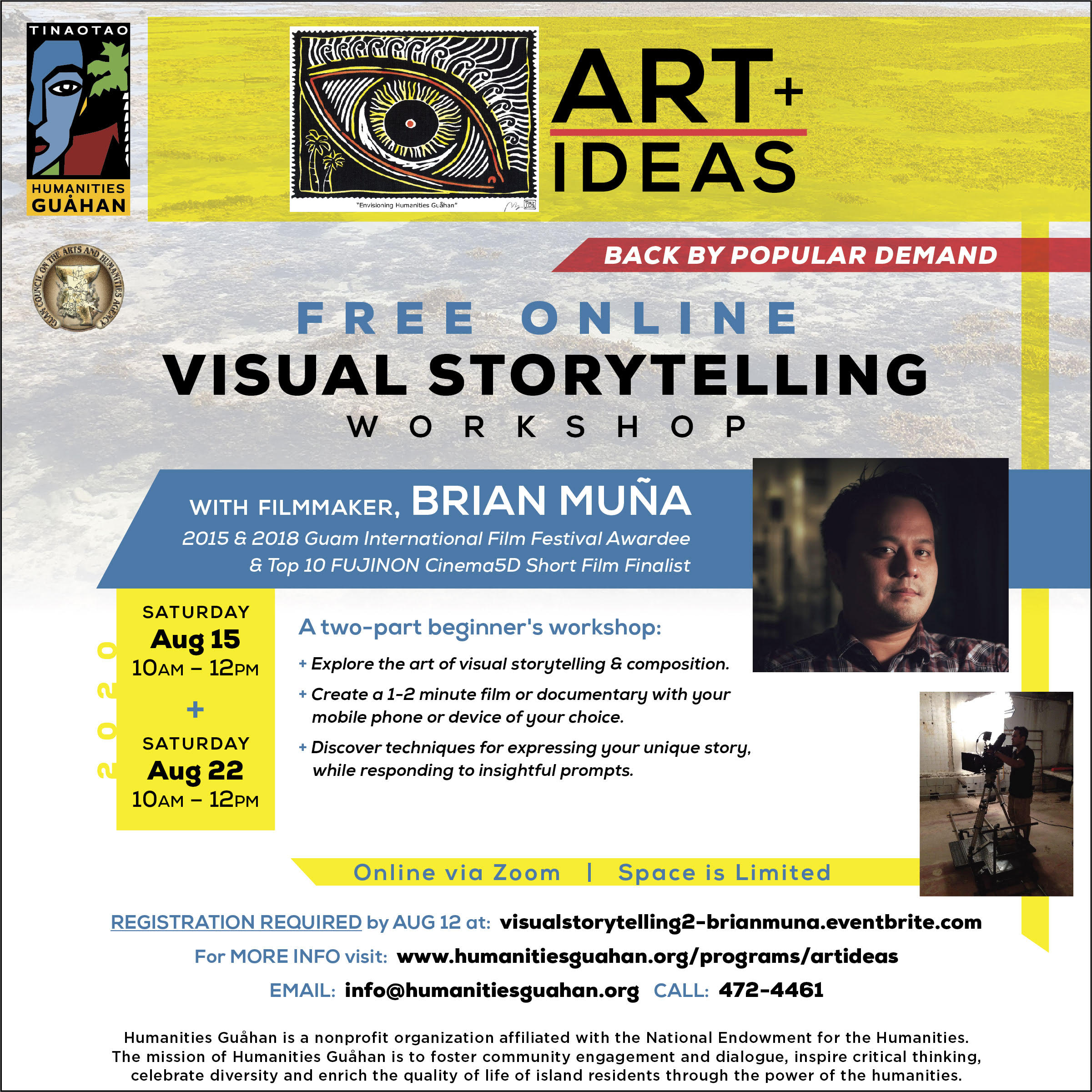 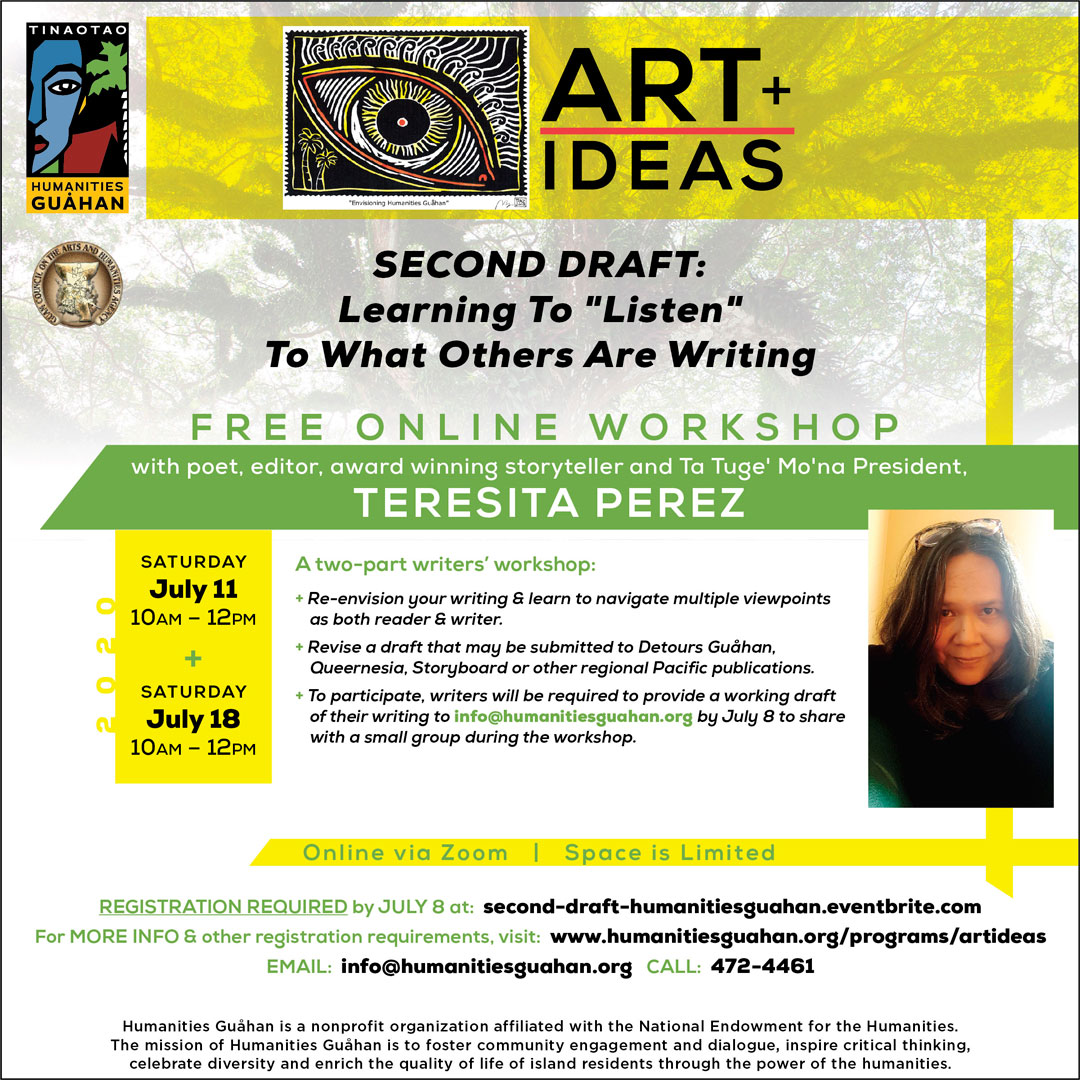 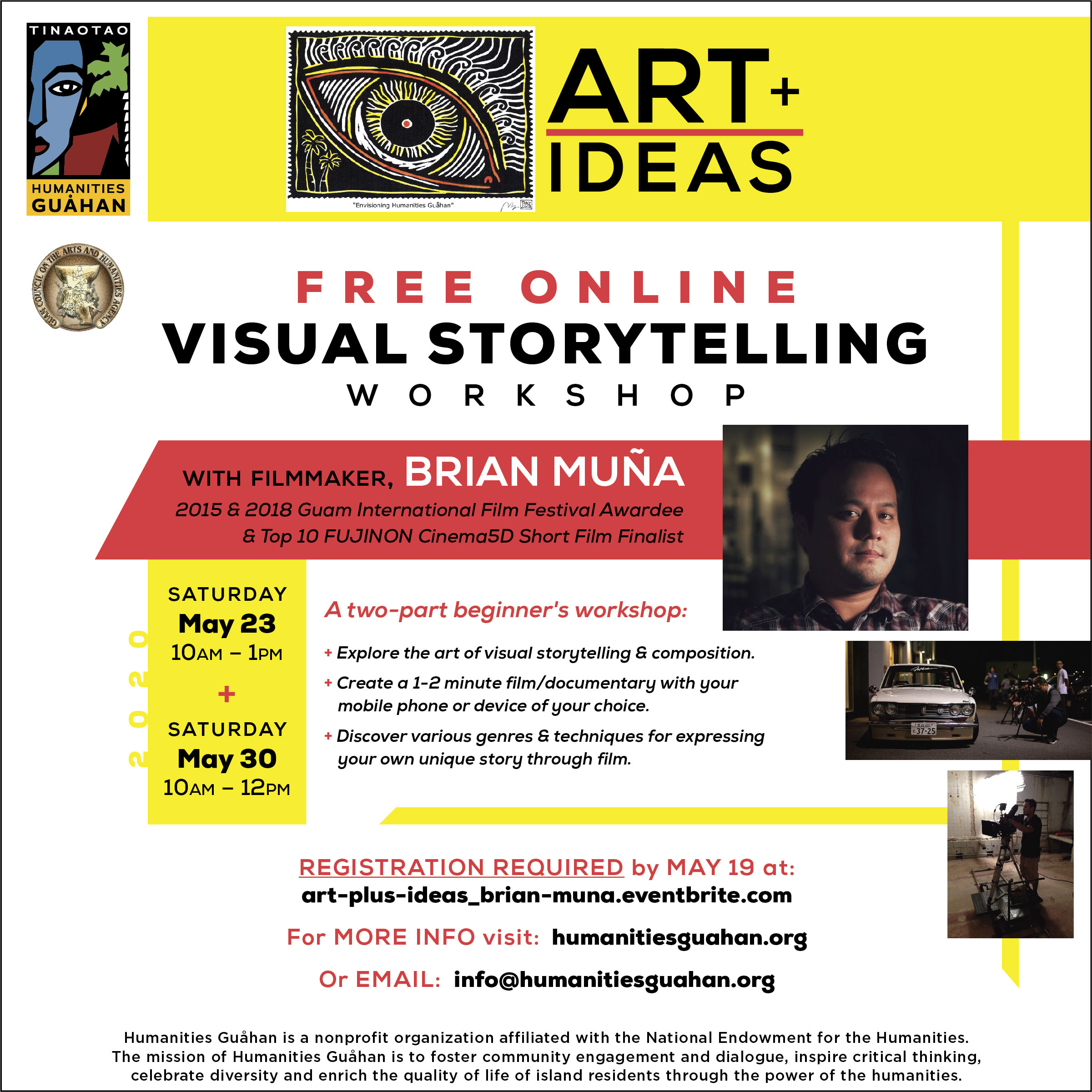 Past Programs from this Series

In this two-part online workshop, Jenny Coffman and Tonnie Guzman of Fu'una Cultures, specialists in locally sourced plant-based cuisine, demonstrated recipes inspired by the season and highlighted the healing properties of food, the importance of supporting sustainable and ethical food systems, and the important relationship between food and culture.

The first session was pre-recorded and took place at the plant-based gollai shop, I’m Into Something Good, located in Hagåtña. Jenny and Tonnie demonstrated recipes for a savory lanchera gollai pie, deep fried okra with raw red pepper hummus, and an addo’ salad using locally grown produce. They also discussed topics such as food sovereignty, the benefits of using seasonal local produce, and tips for creating plant-based dishes that are delicious and healthy. The pre-recorded session was filmed and edited by local filmmaker Brian Muña.

The second session of the two-part workshop was live via Zoom and gave participants the opportunity to engage with Jenny, Tonnie and each other, and to watch them demonstrate additional dishes, which included a probiotic coconut yogurt that was also made into a frozen dessert and a turmeric kombucha tea. Jenny and Tonnie discussed the fermentation processes involved in the recipes and the importance of gut health. Participants were also provided with the recipes so they could try them at home.

About the Presenters
Jenny Coffman is the founder of Fu’una Cultures, a business whose mission is to produce delicious and healing plant-based, organic probiotic food and beverages for the people of the Mariana Islands. She is also owner of the plant-based gollai shop, I’m Into Something Good, located in Hagåtña, which features organic, locally sourced plant-based cuisine.

Jenny, who is inspired by the healing potential of plants and using food as medicine, discovered probiotic foods and beverages while studying biology at the University of Guam. Fermented foods and beverages like Kimchi, Kombucha Tea, Jun Honey Cultured Tea, and Coconut Yogurt allowed her to thrive through her studies while eliminating chronic digestive issues, naturally bringing her body back into balance. After recognizing the healing potential of fermented foods and beverages, Fu’una Cultures became a way to share a culmination of her passions: expressing creativity through nutrition, working hands-on with sacred plant medicine and living a heart-centered life of meaning.

Tonnie Guzman is known for her popular food truck, Z’s Green Canteen— the only food truck that served 100% plant-based cuisine on Guam. She was inspired to start the business in order to offer island residents healthy plant-based food and support local farmers by using as much locally grown produce as possible. Z’s Green Canteen drew many loyal supporters and promoted a family atmosphere that connected culture, sustainability, and creativity using seasonal locally grown produce. She also contributed to the curation of Fanggái’ase’: Conscious Living and Compassionate Eating, a plant-based cookbook and guide for the Marianas produced by Micronesia Climate Change Alliance. The publication aims to build collaborative resistance in the Marianas to a colonized modern diet that erases indigenous culture, pollutes bodies and harms the environment. Tonnie is now a part of the Fu'una Cultures family where she continues to be of service to the community by providing hearty and wholesome plant based meals.

In this two-part online workshop, floral artist Simeon Palomo demonstrated how to create his striking floral designs using Guam-grown plants and explored the cultural significance of the materials. He also shared some history and background of E’ka Gardens, the family-owned ranch and tropical flower garden where most of the plants are grown.

The first session was pre-recorded and filmed and edited by local filmmaker, Brian Muña. It took place at E’ka Gardens, where Simeon demonstrated the process of harvesting the plants, preparing the plant materials, and creating floral designs. His recorded workshop explored inspiring design elements that transformed common local plants and repurposed containers into dramatic floral art pieces. This workshop can be found on Humanities Guåhan’s Youtube channel.

The second session of the two-part workshop was live via Zoom, and gave participants the opportunity to engage with the artist and each other, as well as watch Simeon demonstrate additional floral arrangements, including a tropical bouquet, an arrangement using a plastic bottle, and mini arrangements using shot glasses and similarly sized repurposed containers. Some participants prepared their own plant materials and repurposed containers at home and followed along to create their own sustainable floral art.

Simeon Palomo is a CHamoru floral artist who has been creating floral arrangements for over 30 years. His creations are comprised entirely of Guam-grown plants, featuring tropical flowers and fruits that are primarily grown at E’ka Gardens, a family ranch and tropical garden in the village of Mongmong. Simeon was a Guam Delegate for Floral and Literary Art at the 11th Festival of Pacific Arts & Culture (FestPAC) in the Solomon Islands. He chaired the Floral Art discipline at the 12th FestPAC, which was held in Guam. He is also the author of, tropical art, GUAM– a book featuring photographs of his floral art and showcasing the fusion of floral art with Guam’s culture, history and environment. After retiring from the Guam Museum in 2017, Simeon started E’ka Florals, a family-owned floral business with an emphasis on sustainability, recycling, and repurposing. 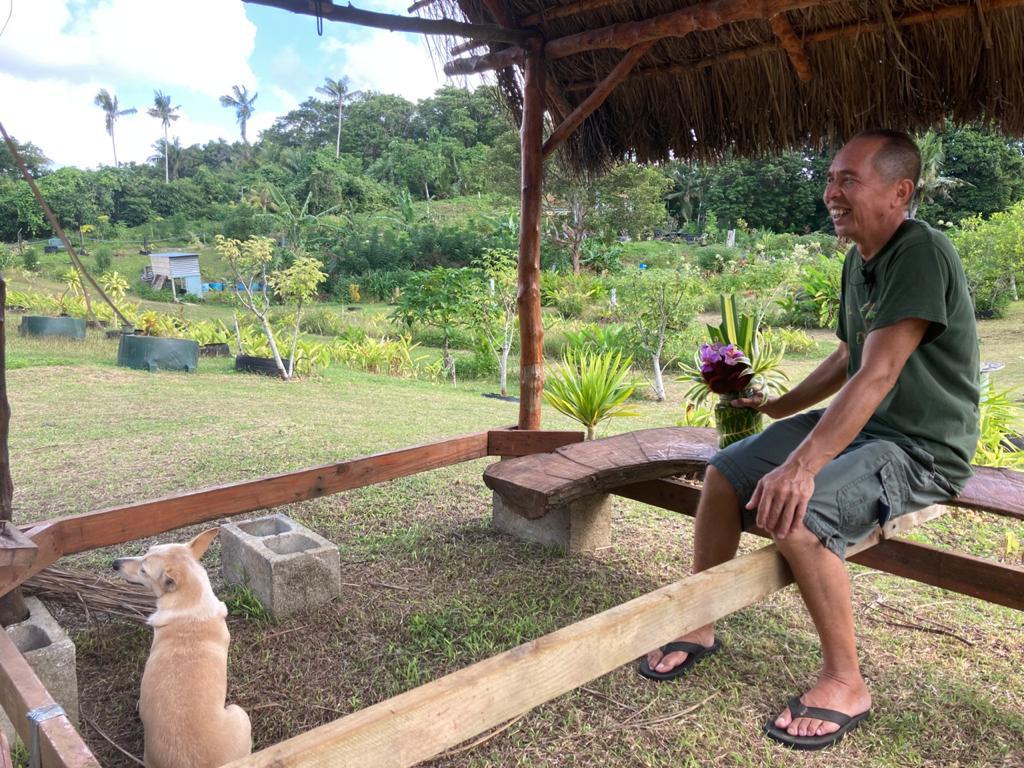 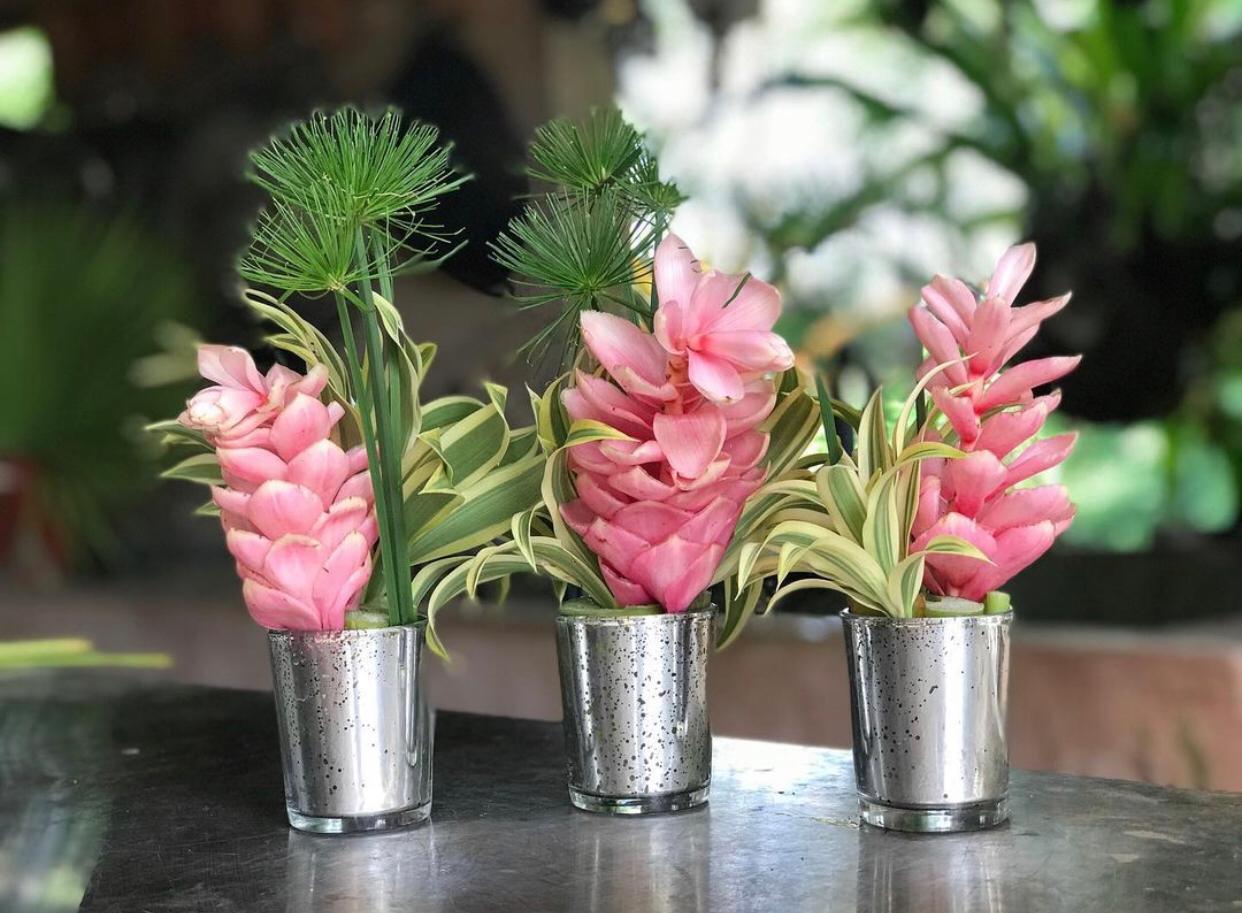 Due to popular demand, filmmaker Brian Muña presented an additional two-part virtual Visual Storytelling Workshop in August.  Workshop participants responded to the following humanities-based prompts in order to create their unique visual stories:
We all belong to the wider Guam community and various intersecting communities within it—explore one of these communities, taking a closer look at how it contributes to the historical, cultural, etc. landscape.

Post-Production Sessions
In October and November, Brian also led small group post-production sessions with participants from the Visual Storytelling workshops in order to provide more focused guidance and feedback on their short films.  Many of the finalized films explored themes such as family, loss, rebirth, life in the pandemic, and issues around climate change and invasive species in the region.

Local filmmaker and photographer, Brian Muña is a Guam International Film Festival (GIFF) awardee, best known for his short films, “Luther” and “Plastic Bag.” His work explores the abilities and capabilities of visual mediums to convey emotionality and the human experience. Brian has been involved in filming some of Humanities Guåhan’s most notable projects, such as Kuentusi I Hanom, Indigenous Dance: reSTORYing our Environment, Dancing Earth in Guam, and Kuentusi I Tano’. 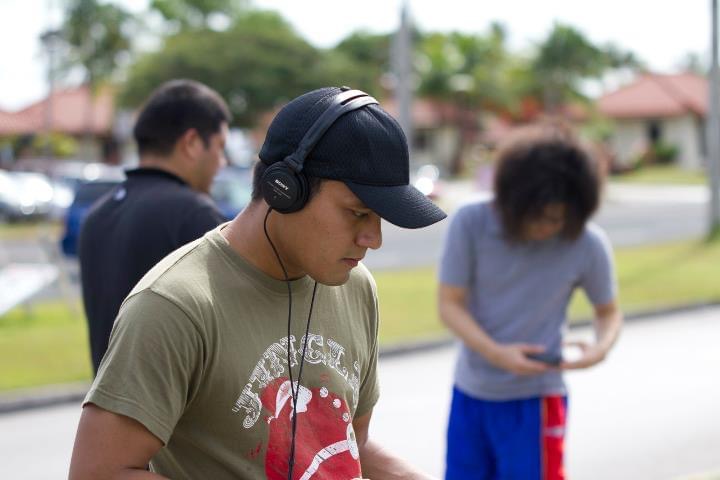 Second Draft: Learning to “Listen” to What Others Are Writing
A writers’ workshop with Teresita Perez (July 2020)


This two-part workshop aimed to help writers find a balance between a variety of reader expectations and their own wishes and goals for their writing, enabling them to produce a second draft of their work. The Second Draft workshop also aimed to help writers prepare their writing for submission to local and regional literary publications. Their work included poetry and short prose dealing with topics tied to militarism, colonialism, environmental degradation and over development; those relating to CHamoru culture and identity, such as language, history, core values, intergenerational relationships, and gender; and personal stories exploring loss, love, and faith.

During the first session, Terry presented the guidelines and expectations for the workshop, which focused on approaches as a reader of other writers’ work and as a writer, considering feedback and working to develop a second draft. The workshop emphasized being in conversation with your fellow writer and clarifying the writer’s intent. She also went through techniques, such as practicing a holistic reading followed by an analytical reading. Writers were then divided into small groups (via Zoom’s break out room feature) and read one another's work, practicing the approaches and techniques outlined by Terry. Participants used this feedback to create a second draft of their work.

In the second session, the writers returned with their second drafts and were divided into the same groups and once again practiced the approaches and techniques introduced and used in the first session. Also during the final session, representatives from Detours Guåhan, Queernesia: An Anthology of Indigenous Queer Oceania, and Storyboard: A Journal of Pacific Imagery provided information about their organizations and upcoming calls for submissions.

Teresita Perez is the award-winning re-teller of CHamoru Legends: A Gathering of Stories, published by the University of Guam Press, and the lead editor of Local Voices, a FestPac2016 anthology. She is the president of Ta Tuge’ Mo’na, a Guam nonprofit organization that supports literary communities in Guam and contributes to the development of a written literary tradition that expresses local and regional perspectives. Perez teaches academic writing at the University of Guam. 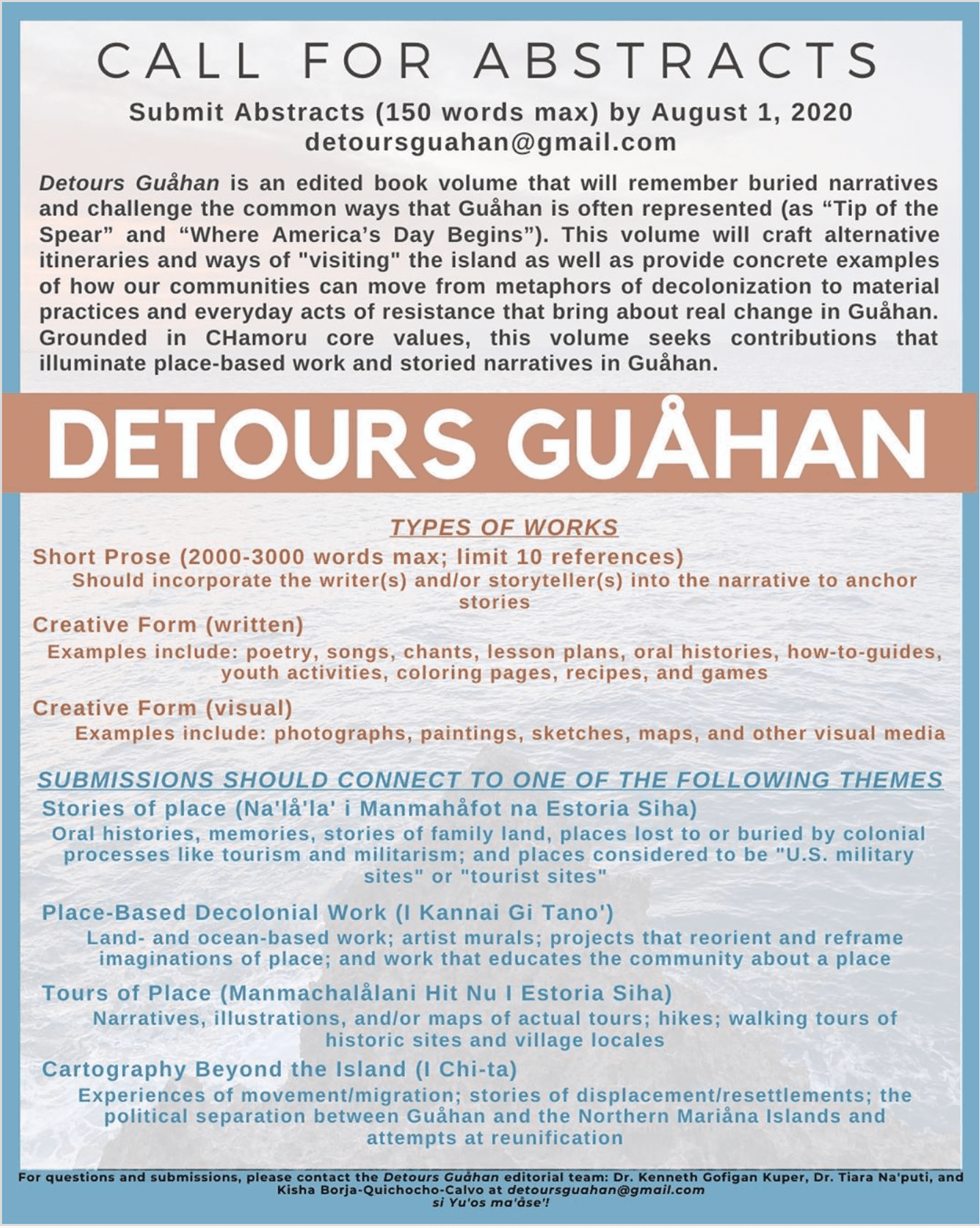 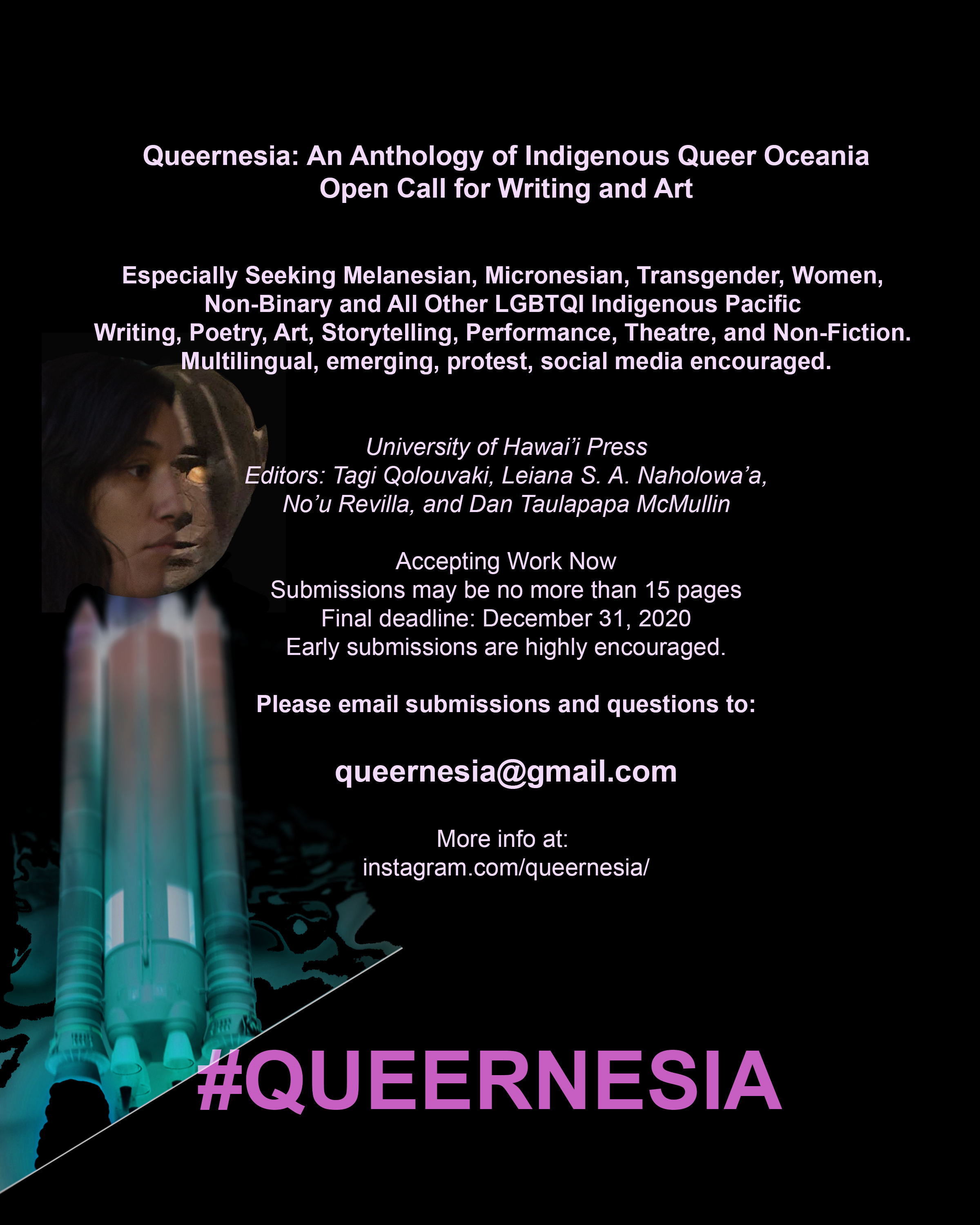 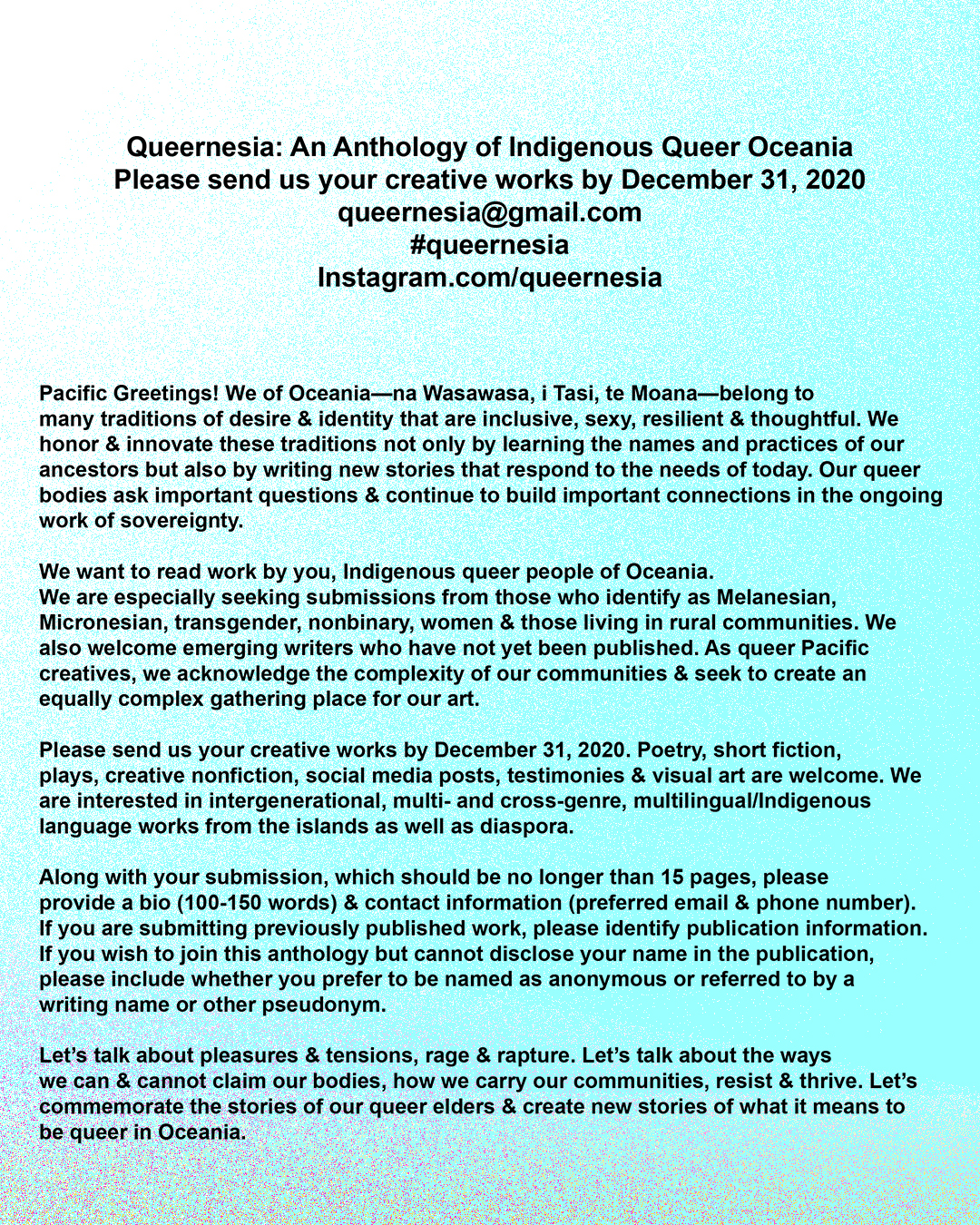 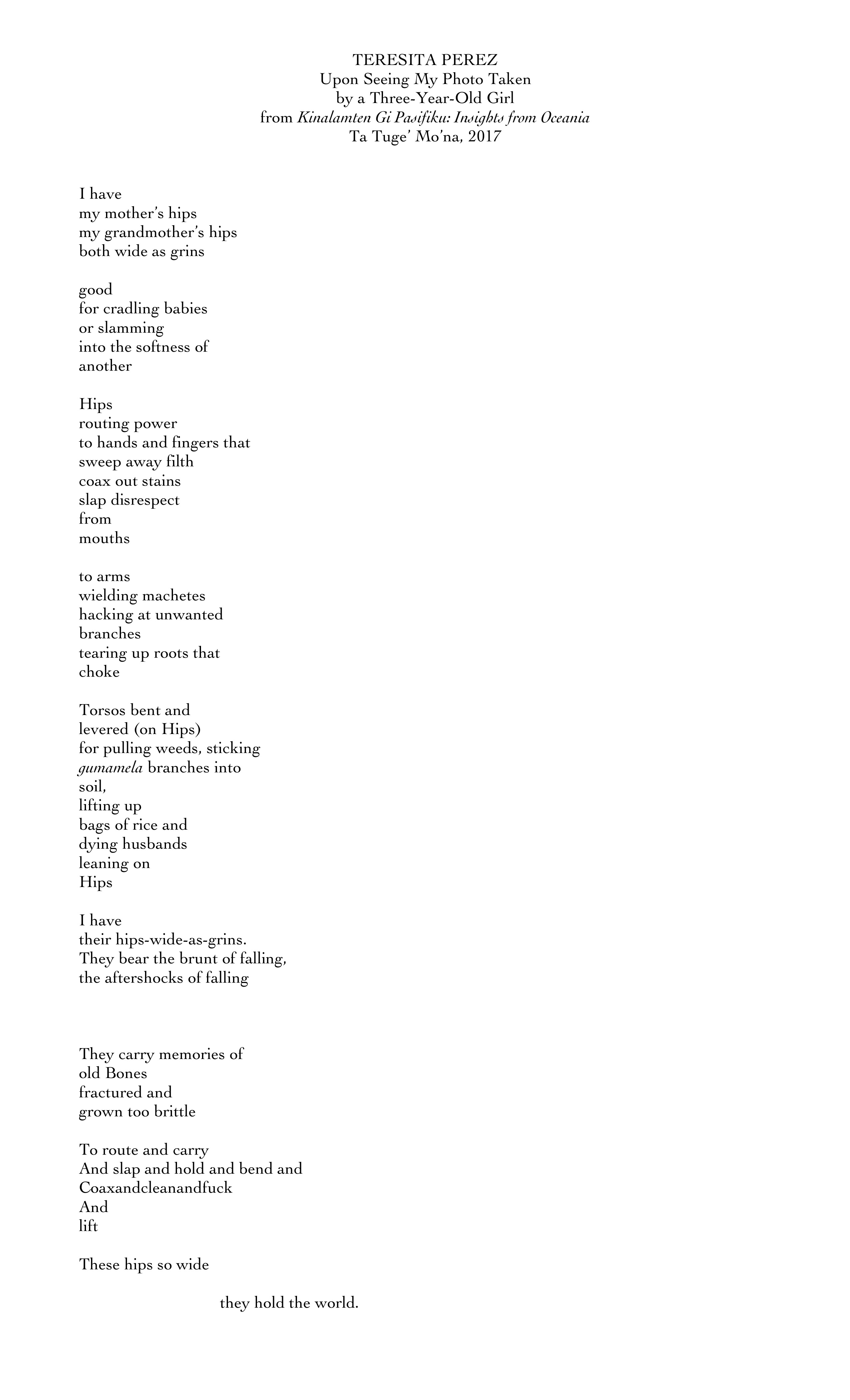 Sign up for regular email updates from Humanities Guåhan!